How to create customer profiles to reach your target audience – “contact from 3pm to 6pm using script A and agents 1, 2 & 3”

A company we worked with had procured a list of 10,000 customers from an IFA (Independent Financial Adviser), who had been selling policies on behalf of their organisation. The IFA decided that they wanted to sell their list and close down the business due to new legislation being introduced in the financial services industry. The main objective of the company was to index link the new pool of customers so that their policies would be in-line with new interest rates. The main thrust of how the campaign would work, was to do an outbound marketing campaign that would involve an initial letter, a follow-up call, an email and then some type of closing activity.

When we sat down to talk to the company about their objectives for the campaign, my first question was to understand their target. It transpired that the company had a target conversion rate of 30% for the new list of 10,000 customers. I then explored how they knew they would get a 30% conversion rate on a set of customers that were “unknowns” to them. What followed were a series of responses based on past performance of marketing campaigns done on other sets of customers with different variables unrelated to this new set. As we continued to discuss their campaign, we all came to a realisation that the new customer set was very different to anything that they had experienced before. Why? They were a new set of clients that they had never had experience of directly; in essence in their industry (Insurance) these new clients were seen as “orphan” records.

Orphan records presented the client with a bigger question: “How do we take this set of new clients, and know whom out of them will be a good profile of buyer for the index linked campaign?” Our question to them was “Do you know the criteria for your ideal buyer?” We discussed this at length and soon realised that there were a number of different profiles that the team had. This is where things really got exciting and the power of analytics came into play. We proposed a solution that would provide them with a profile of their best customer based on a number of variables that they would assemble. Oddly enough, the team were determined and under the assumption that this was unnecessary and in their experience they would be able drive their campaign, without these profiles being created.

As we explored where our team could help, we realised we could undertake a control test for the new customer base. Control groups are often used in marketing campaigns as an initial exercise to see how two groups respond to different strategies / messages during the lifetime of a campaign.   Our team started building a profile based on certain criteria – demographics, products previously bought, responses in previous marketing campaigns (if the data was available), customer lifetime value and so on – we did this by looking at the current client base that the client had built independent of the new 10,000 records. Once the profile was complete, we then applied this against 2000 randomly chosen records that we had selected and segmented the list providing the outbound campaign team with a prioritised list. The list also lost a number of customers that would never buy in this desired campaign, so instead of 2000 we had less than 1500. Big reductions in our new base of clients, providing a refined, targeted and healthier prospect base.

The campaign kicked off with the two control groups in full flow. On the one hand, the client was working on their list of 2000 customers; our team was working on the refined list. As we went through the first few weeks of the campaign, we both more or less did the same activity. However, this is where things changed. The control group that our team were working on were analysed mid-flow. The analysis provided a rich picture of how the campaign was being executed i.e. how many clients had been contacted, how many had converted, how many were outstanding etc.

We were able to start making correlations between the segment of customers by age, by time box (time of day when they were called), by agent (calling them), script used, region and so on. Of massive interest to us were the patterns that we uncovered – people between the ages of 45 – 60 were more likely to convert between 3pm – 6pm, using Script A, and responding to agents 1, 2 & 3. This allowed us to quickly adapt our resources and using other patterns we found within other segments, the outbound team were able to be more effective in their approach, and thus their conversion rates improved.

We repeated the same process at week 4 and applied the same logic where we saw different correlations, based on the areas we were looking at above. Things worked very well and we were very happy with our results. As we drew closer to the 6 week checkpoint, we were more focused on the meeting we had with our client. The day came when we sat down and discussed each other’s control groups. We were able to show the logic behind our approach by all of the analysis we had carried out and this was an impressive view of what data can highlight, the insight it can provide and the relevant actions that can be taken. The client had converted about 2% of their target base and we had converted 42% of our target base.

This is the jaw dropping power of a mixture of business intelligence and advanced analytics. By bringing disparate sources of data together, in this example we had customer, call centre, sales, product data etc. We had worked through our approach in a sensible manner, working within a framework (not guess work or gut feel), applying analytical techniques, building dashboards that would take all the feeds of data so that we could slice and dice / drill down and analyse more deeper than is possible with excel (which is what most companies still use). The dashboards and the range of questions that we could answer were wide and varied, with ultimately no limitations as we had all the relevant data that we could interrogate to improve our decisions and course correct.

To take a fresh look at your analytics get in touch 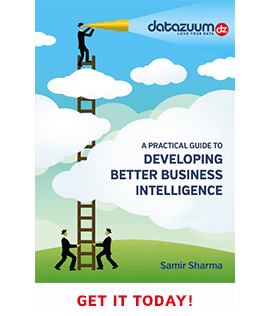